Great Press for Fit for A Frankenstein!

Fit for a Frankenstein has gotten a lot of amazing reviews and endorsements since its premier.  Check out some of it below...

Buy a copy direct from the authors here.

“Mary Shelley’s idea for Frankenstein, or The Modern Prometheus came to her in a dream; McComas and Starrett’s version has the wry, campy, wisecracking tone of a bedtime story told to a youngster by an affectionate adult — though the scenes in which Ygor becomes physically handicapped and has other misadventures are creepy, grisly, and evocative. Also wrenching, but in a sweet way, is the nature of his relationship with the Monster. When Ygor fears he has lost his companion, ‘his withered old heart pounded in his chest.’ As the fiendish-looking giant remarks upon saving Ygor from probable death, ‘Friend….goooood.’ With poetic license, the authors have created new characters: Klaus Hauptschmidt, the tailor who makes the monster’s new 66-X-X-Long suit, a lonely, unappreciated wine-drinker in a beer-loving burg; and Hauptschmidt’s blonde-pigtailed, dirndl-wearing daughter, his liebchen Gretl. McComas and Starrett’s depiction of the age-old Frankenstein classic turns the rank Monster into a lover of cheese: he will do almost anything for a block of it. Quirky details such as this, dream sequences rendered with chilling prose, and little inside jokes (such as playing with the number thirteen) can turn any day into a frightfully fun Halloween.”
- fearlessbooks.com
“Many of us grew up watching classic black-and-white pictures set in a foggy recreation of Eastern Europe where vampires prowl by night, werewolves roam in the light of a full moon, and monsters are made by scientists careless in their pursuit of the secrets of life. And if your imagination was sufficiently stimulated by those late night classics, you probably sketched out your own scenarios for Ygor, Dr. Frankenstein, and company. That’s exactly what a pair of Milwaukee-linked authors did—years after first encountering those old movies. Fit for a Frankenstein by Paul McComas and Greg Starrett is an entertaining novella inspired by an apparent gap in 1942’s The Ghost of Frankenstein: Frankenstein’s monster, thoroughly disheveled and caked in dried sulfur, reemerges in the next scene cleaned up and in a new suit. Fit is a cheeky tale of how Ygor helped the monster spruce up, replete with Ygor’s Balkan enunciation: ‘You valk into ze vater. It vill vash you clean.’”
- Milwaukee Shepherd-Express
“Hands All on Gretl
It doesn’t all have to be about the meaning of life. As readers, it’s nice to have a breather — though silliness is hard to write. Yet McComas and Starrett have, happily, mined their childhoods and many of ours to stitch together Fit for a Frankenstein, a short, snappy joyride that manages some serious comedy. You may not learn anything about the core reasons for existence, but you may blow a fuse or two at the nonstop jokes, puns, and in-the-know shadowboxing that make up the story . . . . The authors use just about every form of humor you can imagine, with a shockingly high hit rate. They’re smart enough to know that the key to comedy is character, and so give readers a nice gallery of goofy ghouls. We know who we’re with, and the clockwork just keeps ticking. The fun is found everywhere. From “Chapter Vun” to the campy Authors’ Photo, the humor comes not just from the jokes and puns and groaners that grace most every paragraph, but as well from the in-jokes and the intense references to to just about every film incarnation of the [Frankenstein] story, good and bad — which gives the novella a fun dimension that is unique . . . . Anyone who spent childhood TV time in front of a small black-and-white screen watching ‘Chiller’ or other hosted horror-movie shows will find companion souls here. Fit for a Frankenstein is a great fit for readers: a fun book based on bad movies we nonetheless loved because they were clearly the products of people who loved what they were doing.”"
- Rick Kleffel, California Public Radio (read the full review here)
“Ever wonder where the Monster got that snazzy new suit he’s wearing in The Ghost of Frankenstein? Well, let’s just say it wasn’t from the Men’s Wearhouse. I expected to get a reasonable start on Fit for a Frankenstein when I opened it, but I ended up reading it in one sitting. I’m not sure how co-authors Paul McComas and Greg Starrett managed to write a novella that reads like a black-and-white movie, but they did it, and it’s a helluva lot of fun. It’s great how the tone changes gradually, almost imperceptibly, from a somber approximation of the movie to all-stops-pulled-out silliness at the end. I also enjoyed how the authors managed to weave in the remaining sequels, and from Ygor’s point of view. (Most everyone tends to forget that the Monster really is Ygor in the later films; possibly even Ygor has forgotten!) Even minor details in the movie are explained by the events in the book (The sleeves were too short because there was no initial fitting!). The cover illustration is great, with just the right amount of punch, and the technical aspects of the book are also excellent; I don’t recall even once being snapped out of the story by a typo. Finally, it was nice to read something fun, rather than having to quote my father-in-law: ‘Bring some water, it’s pretty dry!’ Rather, as the Monster himself might say: ‘Book gooooood!’”
- Mike Humbert’s Frankenstein Page
“When Greg Starrett met his future best friend Paul McComas almost 40 years ago, they bonded over an interest in monsters and science fiction. Recently, their shared passion culminated in a book the duo co-authored, mostly via email — a novella that, thanks to its humorous twist, can be enjoyed not just by monster and SF fans, but by anyone.”
- Inside Munster [IN] Magazine

Posted by Stephen D. Sullivan at 8:43 AM 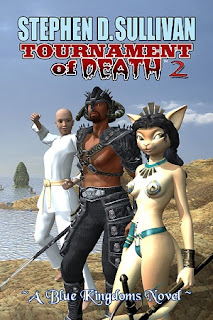 "Don't wait for me!" Rhiannon the sea elf cried as the first of the human-faced dogs bore her to the ground. "Keep going! I'll try to catch up!"
You may have lived through the first tournament, but this one will kill you....
The lost island of Shumakai returns, bringing fabulous treasure, unknown challenges, and almost certain death. Only one person survived the original Tournament Maximus, and now she and her lover find themselves drawn to the isle once more. Joining them are champions from across the World-Sea: humans, elves, dwarves, cat-people, dog-people, mermen, winged folk, and more. From the kung fu temple of Wudan to the wizardly Isle of Prophecy, all have come to face the ultimate challenge. But even the most talented and powerful will surely perish within the Deluvian Temple during Tournament of Death 2.
Renowned for his fast-paced imaginative tales, Stephen D. Sullivan is the award-winning author of dozens of books and stories, including trilogies for Legend of the Five Rings, Spider Riders, and Dragonlance.
"One of the things that I most enjoy about Sullivan's work is its glee, which occurs in two forms, both of which are very much on display in the Tournament of Death series. One is the demonic glee with which he propels his characters through an obstacle course that would give Indiana Jones pause. The other is the giddy delight with which he playfully rampages through popular culture, filling his world with a vast multitude of monsters and heroes from every corner of the pulp imagination, and somehow making it all work. Enormous fun. *****"
- David Annandale, author of Death of Antagonis (Space Marine Battles)

Buy Tournament of Death 2 from CreateSpace powered by Amazon!

Buy the Tournament of Death 2 e-book!
Posted by Stephen D. Sullivan at 11:27 AM

FIT FOR A FRANKENSTEIN

Buy Fit for a Frankenstein Now! 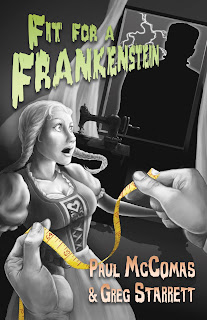 Here, for the first time ever:
The tale that 1940s-era horror movies dared not tell!FIT FOR A FRANKENSTEIN
While en route to the alpine town of Vasaria, the diabolical body snatcher Ygor stops in the village of Kotstadt to obtain a custom-made suit for his friend, the ever-menacing Frankenstein Monster. The unholy duo's visit endangers fastidious tailor Klaus Hauptschmidt and his effervescent teenage daughter, Gretl ... and prompts hijinks of monstrous proportions!
MONSTER MASHER WARNING - Contains one buxom fraulein and some racy innuendo. (Nothing graphic or explicit.)

"Fit for a Frankenstein is a sure fit for any reader who has fond memories of the iconic Monster-or for those meeting him for the first time. It's obvious that the authors of this wacky novella had a barrel of fun writing it, and their glee is contagious as they bring the lumbering, sewn-together fellow back from the dead, accompanied by Ygor (who's a real hoot here!). Share their mad journey in these fascinating pages. You'll be glad you did!"
- William F. Nolan, author of Logan's Run
"McComas and Starrett create a hilarious envisioning of Ygor's and the Monster's quest for an XXL suit 'fit for a Frankenstein'-a tall order indeed! With elements of the gothic, the historical, and pop culture, you'll never look at Dr. Frankenstein's creation-nor at its trousers-the same way again."
- Rachel Waxman, author of The Crickhowell School for the Muses
"Fit for a Frankenstein is a delightful literary Rube Goldberg machine, its intricate design made to manufacture laughs and evoke memories of black-and-white movies seen on a flickering screen. Humor high and low, clever levers from which spring puns so terrifying you have to laugh, and the sound of groaning that may or may not be your own-all will keep you deep in a hypnotic state from which you will be loath to wake. It's smart, funny, and truly goofy in the best of all possible ways."
- Rick Kleffel, "The Agony Column," California Public Radio/www.bookotron.com
Paul McComas is the award-winning author of four critically acclaimed books and the editor of two more. This is his first collaborative novella - and the literary debut of his co-author and longtime friend Greg Starrett. 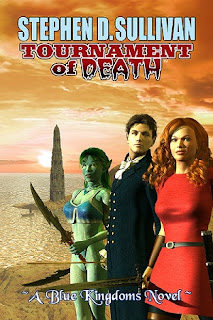 If you make it through this challenge, you won't live through the next...

Monsters! Magic! Swordplay! Romance! Intrigue! Sudden Death! The world's greatest champions face impossible odds in this action-packed, slyly humorous fantasy novel. You want knights and wizards? Elves and dwarves? Cat-women and lizard-men? Kung Fu girls? Your favorites are all here--though only the smartest and strongest will survive the Tournament of Death!

Renowned for his fast-paced imaginative tales, Stephen D. Sullivan is the award-winning author of dozens of books and stories, including trilogies for Legend of the Five Rings, Spider Riders, and Dragonlance.

"One of the things that I most enjoy about Sullivan's work is its glee, which occurs in two forms, both of which are very much on display in the Tournament of Death series. One is the demonic glee with which he propels his characters through an obstacle course that would give Indiana Jones pause. The other is the giddy delight with which he playfully rampages through popular culture, filling his world with a vast multitude of monsters and heroes from every corner of the pulp imagination, and somehow making it all work. Enormous fun. *****"
- David Annandale, author of Death of Antagonis (Space Marine Battles)

Buy Tournament of Death from CreateSpace - Powered by Amazon.

Buy the Tournament of Death e-book!
Posted by Stephen D. Sullivan at 10:56 AM